Travelling the world trading or why trading chose me

Life does not go in a straight line. When thinking about trading I am not visualizing it as a casino. I am thinking of it as a serious business that takes a lot of my time and requires a lot of persistence. It is definitely a full-time occupation and for those that are going to tell you that you can get rich quickly through trading FOREX, you’d better change the channel. Trading has taken a serious part of my life. It has learnt me discipline and also shown me how incredibly important is to be flexible. Trading has also given me the opportunity to travel around the world and visit new destinations. Apart from the stressful environment that trading offers, it also gives you the chance to visit places you have never imagined you would visit before.

I believe that the most important thing in life is the balance– a balance between social life, family, hobbies and work. If one of those elements is missing, I am not able to be thoroughly efficient in doing the rest of them. That is why, I have found my balance by doing the things I like in the way I like. Having said this, I should precise that although trading might be an extremely stressful endeavor, it is one of the most lucrative ones, as well. Thanks to it, I have been able to visit a lot of beautiful places around the world, as I have said before. One of the cities that I visited this month is Stockholm. I just wanted to share with you my fascination with this place and some of its amazing buildings, cathedrals and squares. 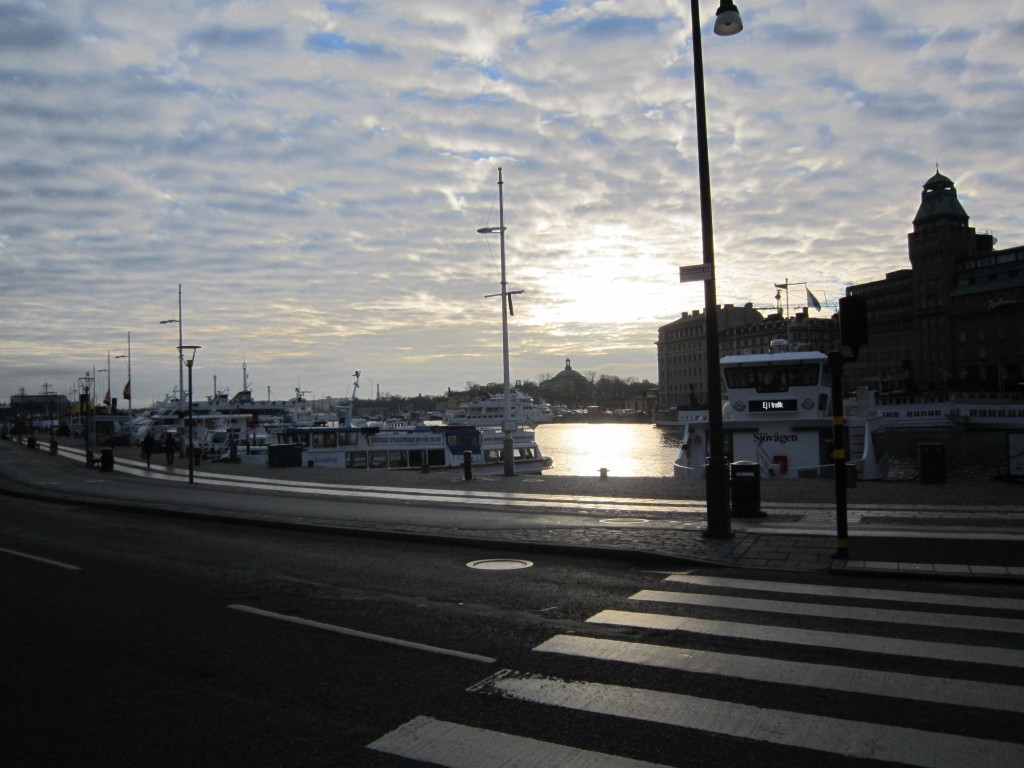 The first picture that I am sharing above has been taken in the early morning of 28th of November, 2014. It was shot by me really early in the morning while my girlfriend was still sleeping and I set out on a journey to explore the city. I was located in the Strandvagen Boulevard, just off the Royal Dramatic Theatre (Dramaten). The theatre itself is famous for producing many actors and directors who would go on to be famous, including Gustaf Molander, Greta Garbo, Ingrid Bergman and many more. This picture was taken on a clear morning and you can see the sky and the marina just in front of me. I was really feeling like a reborn there. It was probably between 0-3 degrees Celsius, but there was no wind and the sky was so beautiful making me forget about the daily routines. The picture below is showing the theatre itself.

After this short walk, I continued along Nybroplan and spotted this amazing house that is currently the Louis Vuitton’s house. Then I picked up my girlfriend from the nearest tube station and continued our walk across the city. The next few pictures are taken also near the Royal Dramatic Theatre. That’s where I spotted this amazing statue of two bears fighting. I just couldn’t resist taking a picture and sharing it with you guys. Although, there is no such thing as a bearish market against bearish market, I believe most of you would understand the meaning behind it. 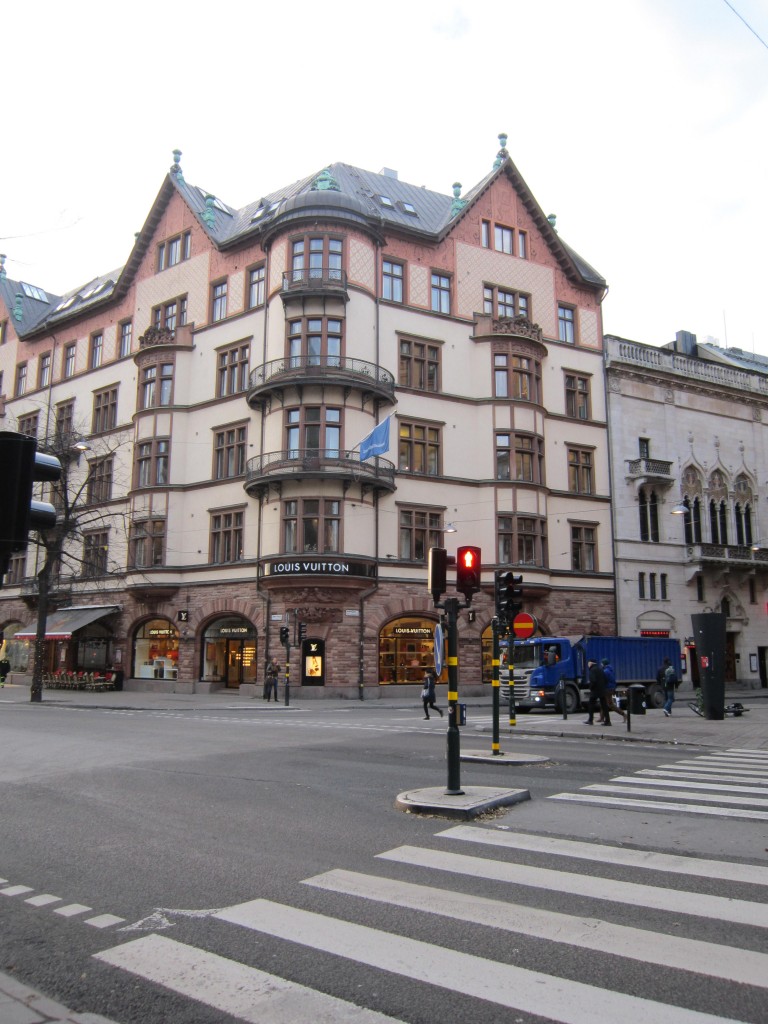 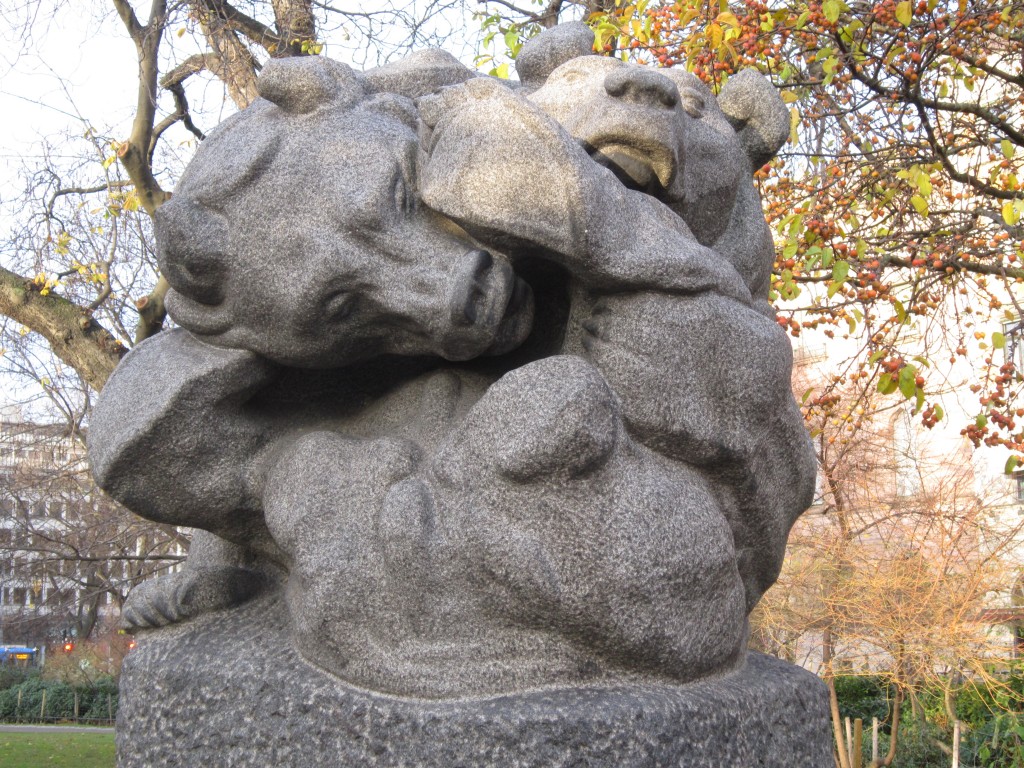 The afternoon we went to the Christmas market, which is located in the old town of the city of Stockholm, also known as Gamla Stan. You can see parts of the market and also five of the most colorful houses I have seen in Stockholm. They were literally looking like taken out of a fairy tale. There, we had a traditional Christmas drink called Glogg– understand Mulled Wine and after that had a lunch in a local restaurant just behind the Christmas market. It was already getting dark (3p.m.), but that is obviously something normal for a Northern country like Sweden. 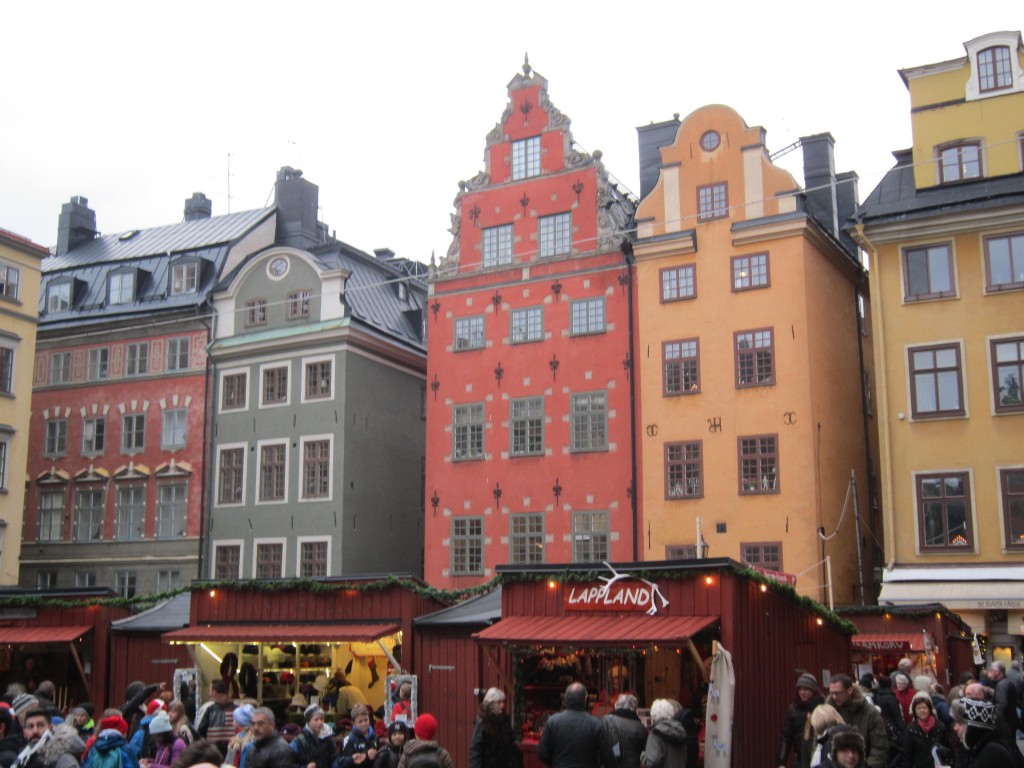 After the Christmas market, we briefly walked through the old town and saw the narrowest street in the whole city called Marten Trotzigs. It is only 90 centimeters wide at its narrowest point. The street is named after a merchant and burgher, who immigrated to Stockholm in 1581, and bought properties in the alley in 1597, also opening a shop there. He was one of the richest merchants in Stockholm, but obviously beaten to death during a trip to Kopparberg in 1617. 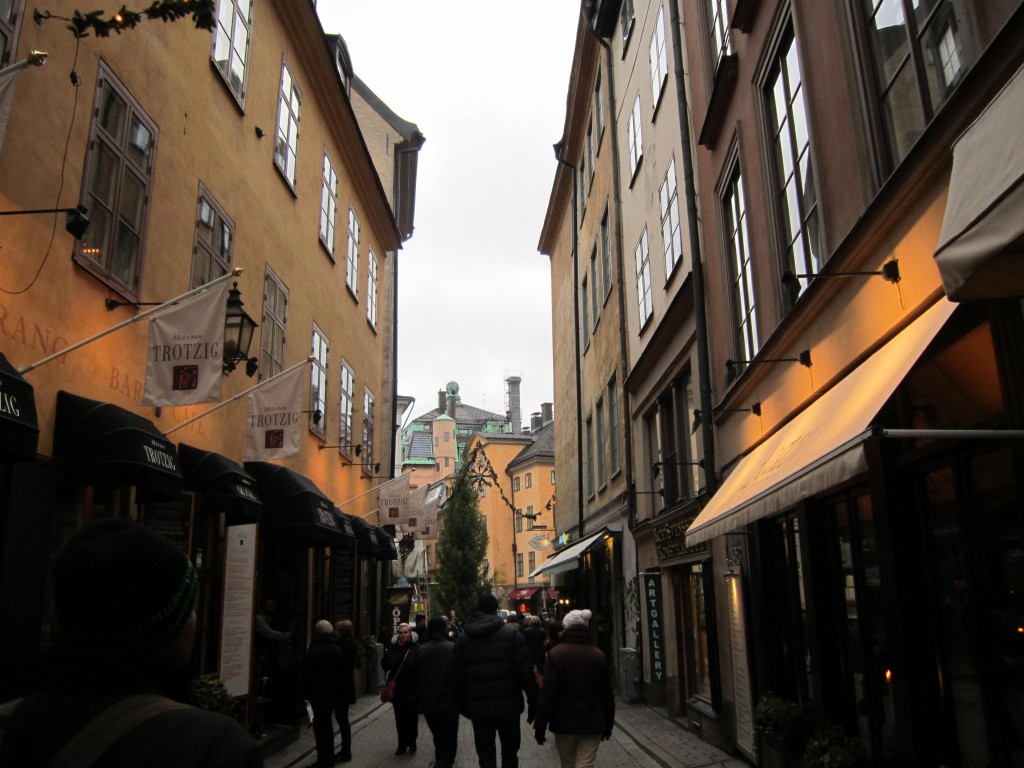 From there, we went straight to Storkyrkan (Stockholm Cathedral)– the oldest church in Stockholm. Its existence is documented as early as the 1270s. The picture below taken by me is showing the interior of the cathedral itself. The church has a gothic character and is dedicated to St. Nicolaus. The cathedral is in a baroque style and it is the home of the oldest surviving image of Stockholm– an oil painting by Vadersolstavlan from 1535. 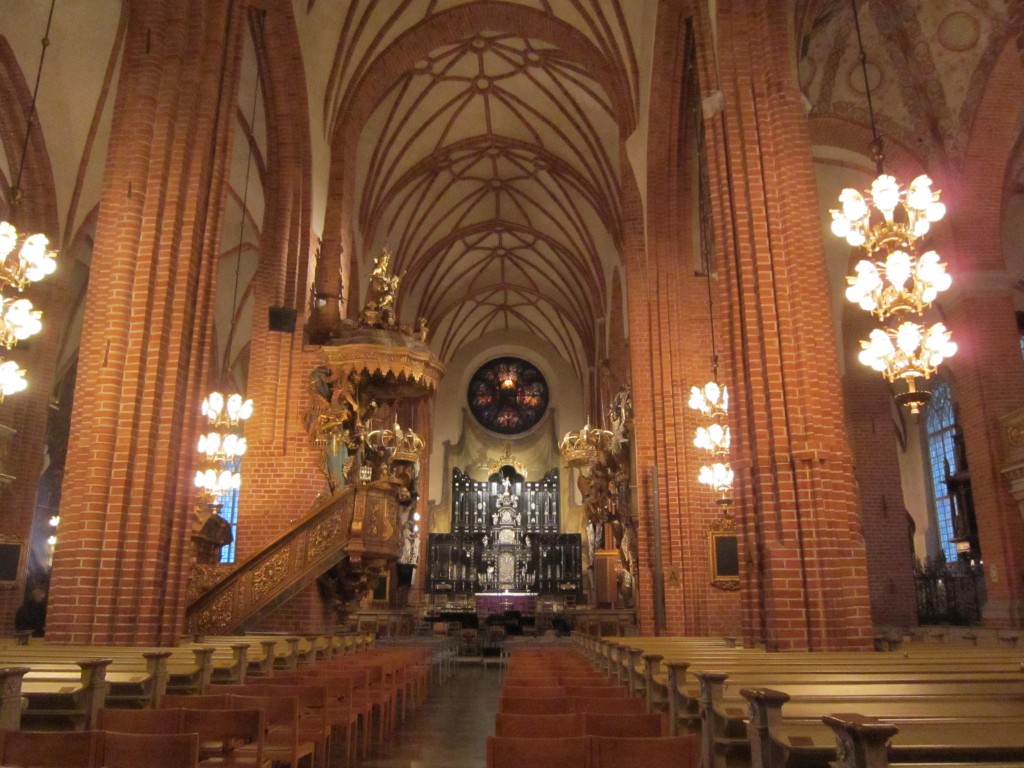 From there we went walked across the Royal Palace (Kungliga slotted). You can see in the picture that the sun is throwing its golden rays over the National Museum. The temperature was close to 0 degrees Celsius, but I was boiling of excitement. The night continued with a typical Swedish restaurant and then a night out drinking typical Swedish drinks including Akvavit… 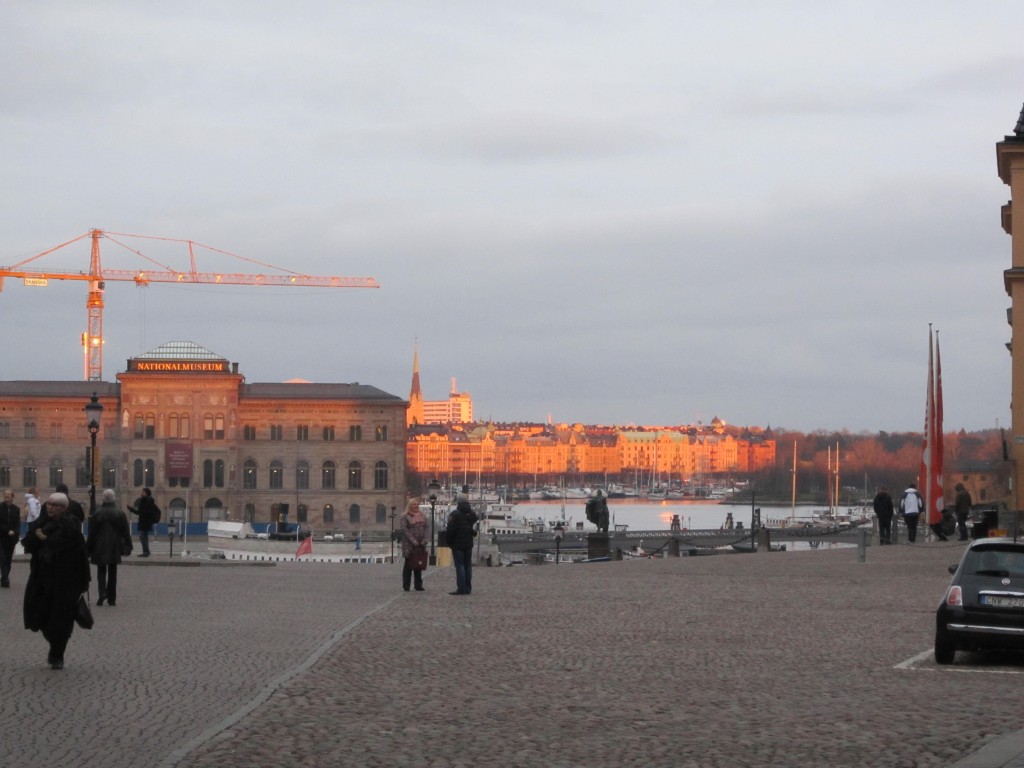 Trading should be as fun as it could be. To be able to take the most of trading and of life, you should have a balanced life. That is the most important thing for me. If you are not taking short breaks from the trading arena every now and then, you are risking burning out too soon. 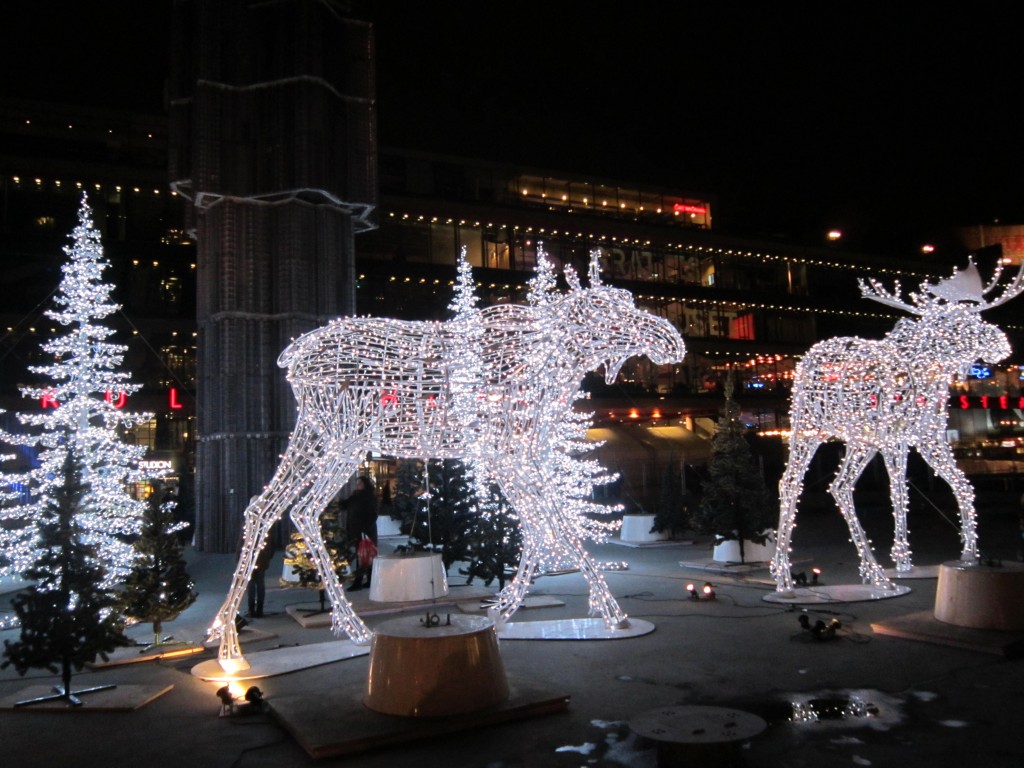 Happy holidays and I wish you successful trading!

10 Ideas That Chess Can Teach You About Trading

2 thoughts on “Travelling The World Trading”